Fuck. Or I suppose I should say ‘fuck’. More to the point, I shouldn’t say ‘fuck’.

I don’t recall exactly when I became aware of my swearing problem. But at some point I realized that a foul word would slip out and I would not notice it until after the fact. Please don’t misunderstand me, I have no notion that there is something immoral about a cuss, but there are enough people who are uncomfortable with ‘crap’ that i need to at least be aware of when I say it. So I started a swear jar at work. $1 in for every profanity.

It did not take long for the effects to start. A few days and many dollars later, I was catching myself before I let a swear slip and not after. The office joined in, both contributing to the jar and calling me out when I let an oath slip.

At this point, I am very conscious of when I swear.

But there were side effects. For some, swearing is an integral part of coding (and even a measure of code quality). While coding, a swear is a short burst of frustration.

Something doesn’t compile? FUCK. That should have worked. Lets try something different.

Now, when usually I would swear, I catch myself instead. Although this sounds like everything worked as planned, there is a major drawback.

Coding can be a lot like hiking. You will find yourself falling info a pace. The terrain, your fatigue, and the your fitness all contribute to your pace.

Catching a swear before it slips out is like tripping on a root instead of crushing it under heal. Trampling the world underfoot to make way for yourself may be considered uncouth or vulgar, but tripping on a root breaks your stride.

Analogies aside. What does the research say? In a paper published in NeuroReport in 2009, Stephens, Atkins, and Kingston, showed that students that were swearing where able to keep their hands in ice water longer than students who where not swearing. In effect, swearing can increase your pain tolerance. However, a follow up study showed the daily swearing reduced the effect swearing has on pain tolerance. Their research suggests that there is something about the emotional value we place on words which is tied into considering them vulgar. Personally I take great delight in the notion that ‘Gosh’ or ‘Jinkies’ could have an hypoalgesic effect on someone with a particularly strict view on vulgarity.

Of course Stephens and company won the Ig Nobel Peace Prize for their efforts.

For a more entertaining presentation of the research, check out the Profanity episode of Penn and Teller’s Bullshit. 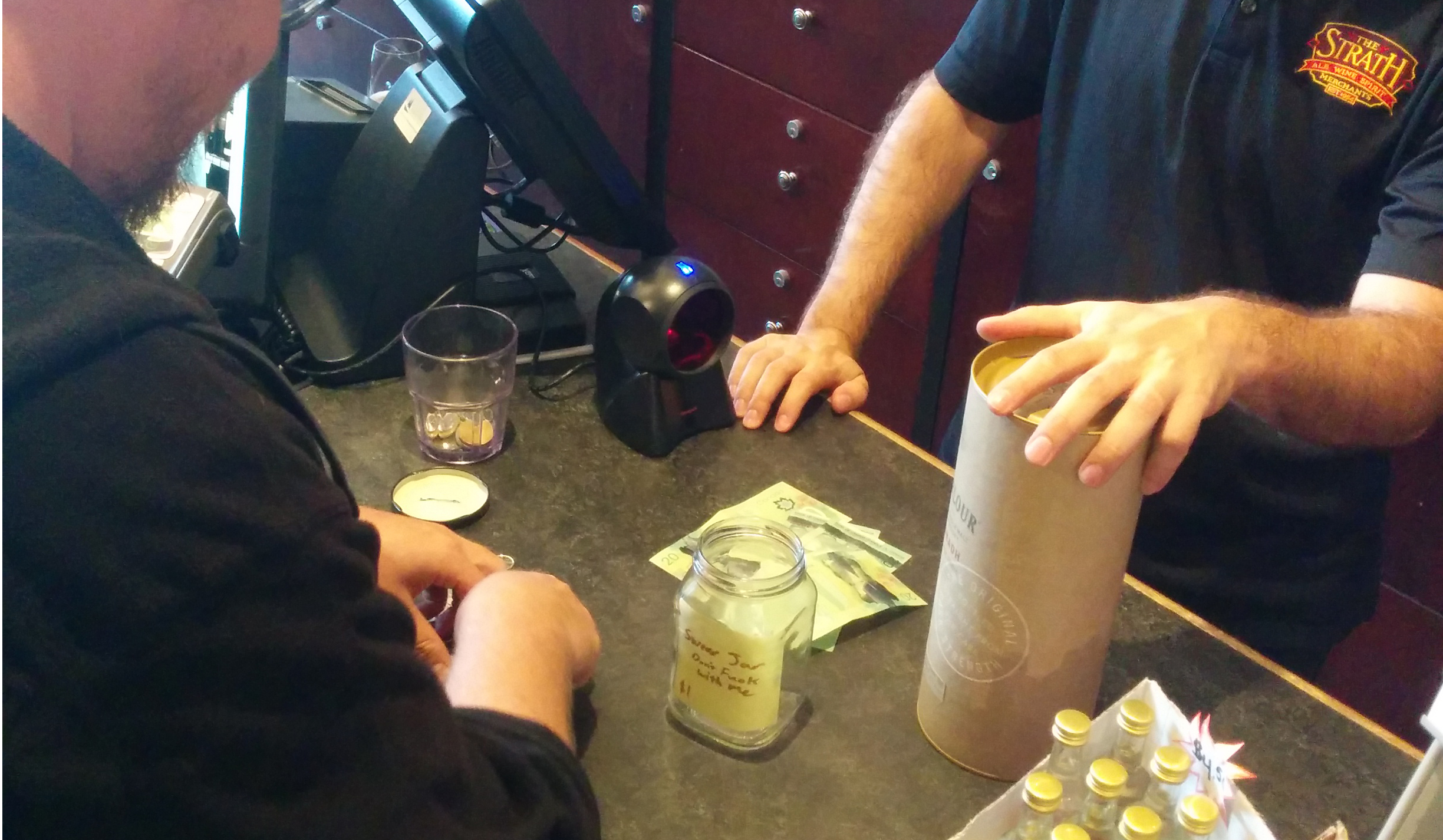 In the end, by the time we decided to retire the swear jar, we had $96 dollars in it. We took the jar to the Strath and turned that swear jar into a delicious bottle of Aberlour. In fact we where $3 short, but a quick ‘shit’, ‘crap’, ‘fuck’ balanced the books nicely.

Where is the Swear Jar Now?

Currently, the swear jar sits along the the lineup of emptied whisky bottles.

The experiment is ended. I don’t think I will use a swear jar again. Its not that the experiment failed, it is just that I don’t care for the side effects. 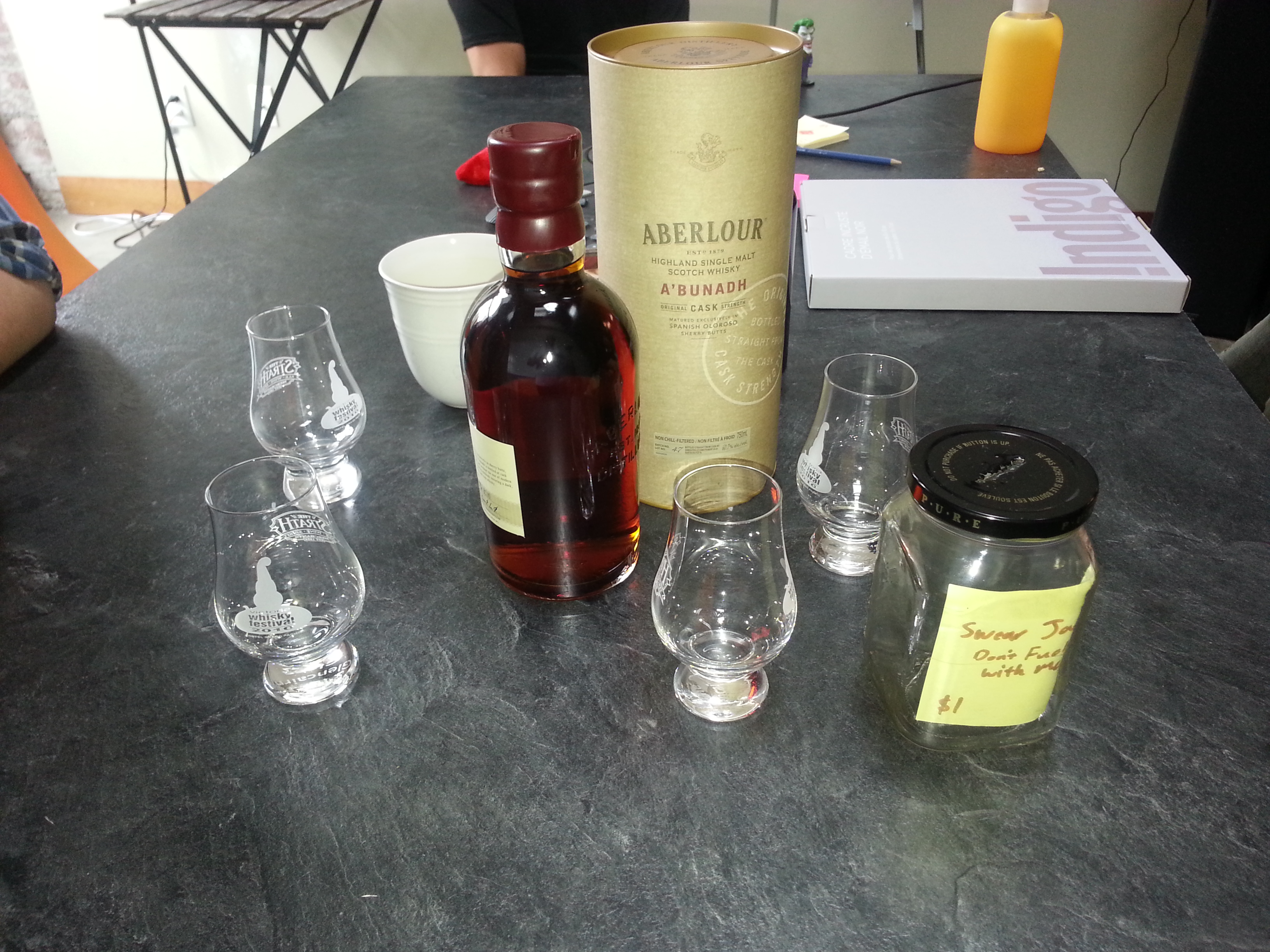 What I am Reading